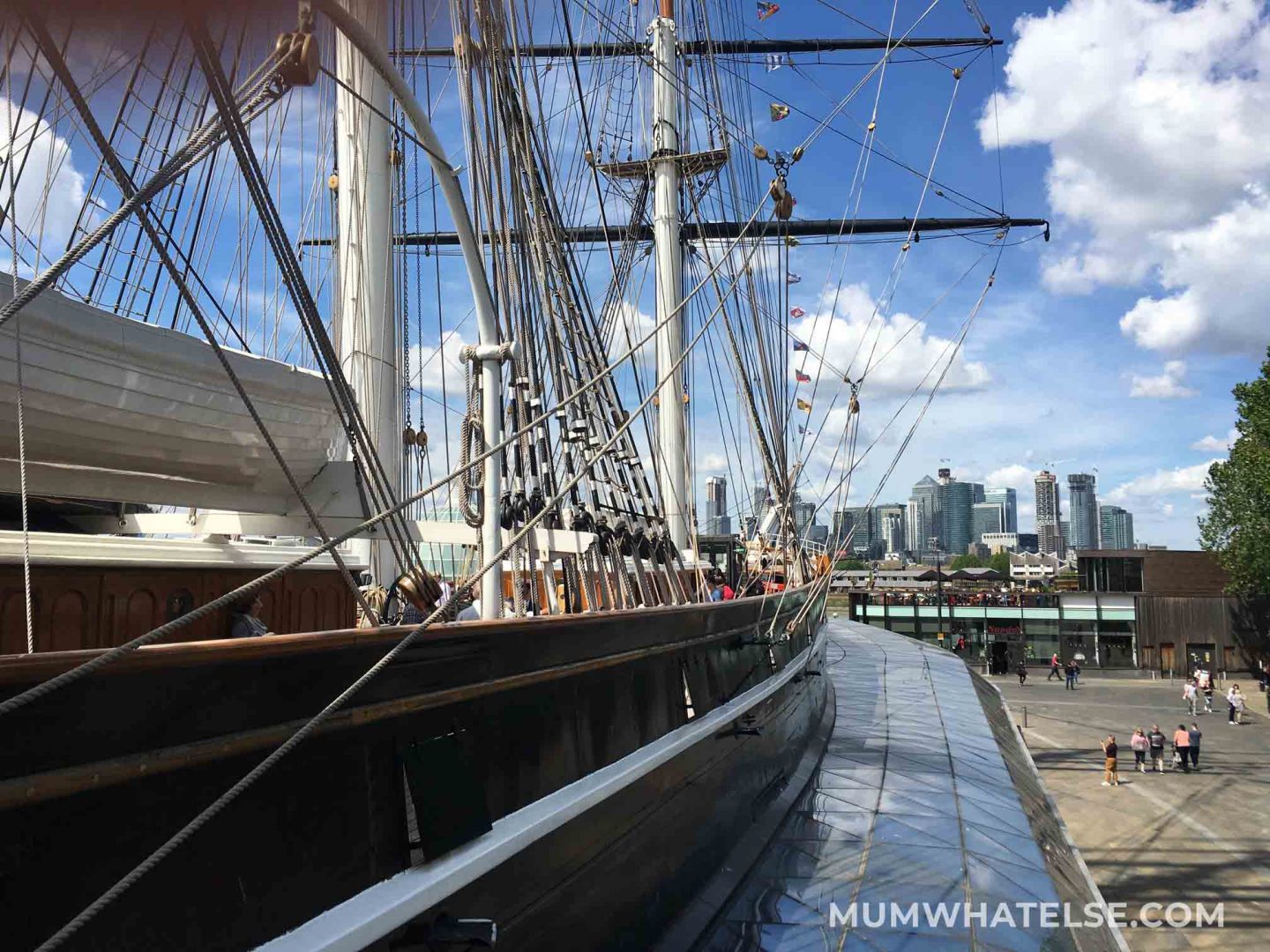 Half-term week, May, which means parents everywhere will be wracking their brains for entertaining things to do with the little ones. I got an idea for you: a family day out at the Cutty Sark in Greenwich!

Though it’s located just five miles from central London, a visit to family-friendly Greenwich almost feels like a retreat. There is so much to see in this leafy district east of London that one day is not enough. We took the DLR and walked out right to the Cutty Sark tube station, just two-minute-walk from the ship.

The ship is close to the Thames Bank. I suggest to set the tone for your family day out by taking the boat trip down the Thames. Or as we did, on your way back home. 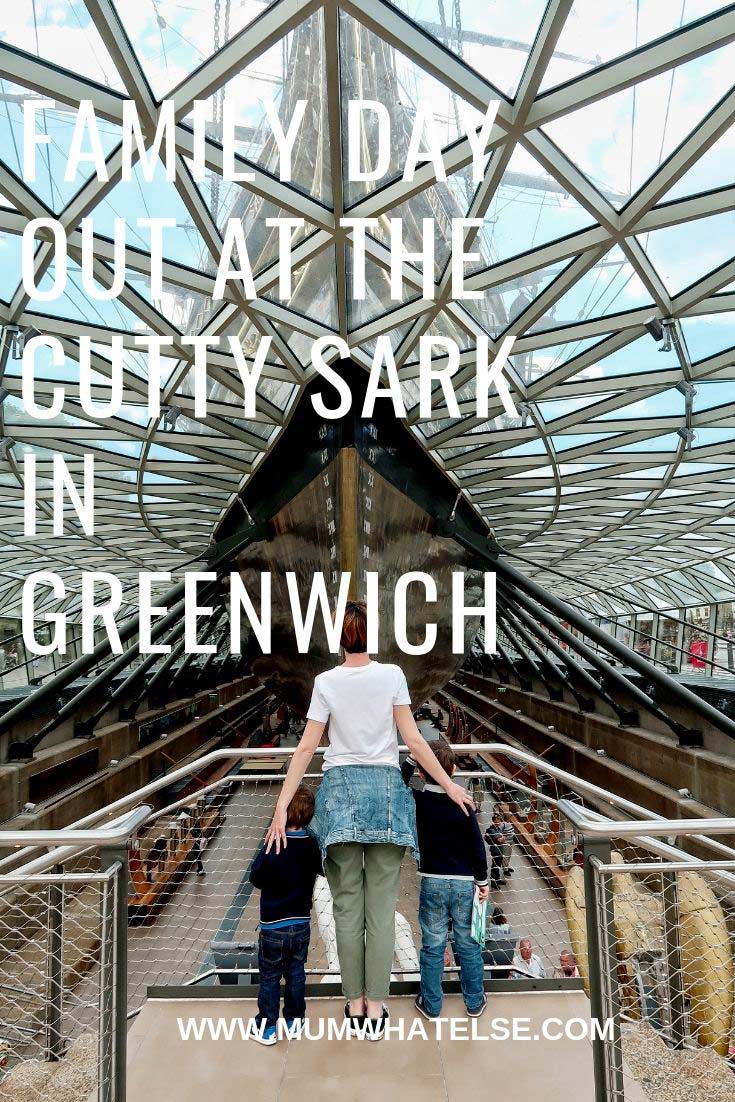 WHAT DOES CUTTY SARK MEAN?

Cutty Sark means short nightie in Scots and refers the figurehead that adorns the bow and which depicts the semi-undressed witch Nannie, character n the Tam O’Shanter poem by the Scottish poet Robert Burns.

WHAT IS THE CUTTY SARK FAMOUS FOR?

Cutty Sark is a British clipper ship, built in Scotland in 1869. She was one of the last and fast tea clippers to be built, designed when the tea business was lucrative and speed was important. Survived two fires, it was reopened in 2012 following a large restoration and conservation project.

She sailed in 16 countries and traveled the equivalent of two and half voyages to the moon and back.

It is one of the only three original compositions (wooden hull on an iron frame) clipper ships from the nineteenth century.

Royal Greenwich Museum, which includes Cutty Sark, along with the National Maritime Museum, Queen’s House and Royal Observatory, is one of the top 10 tourist attractions in the UK and UNESCO World Heritage Site.

You can also delve into the history of the Cutty Sark with the free audio guide.

WHY VISIT THE CUTTY SARK?

Climbing aboard the world-famous Cutty Sark with its stunning architecturally designed glass dry dock is really a thing. In this way everyone can visit the Cutty Sark come rain or shine! And have a unique perspective walking under the copper-clad hull and fully appreciate the greatness.

We started the visit of the ship by walking through a hole cut into the hull of the ship. We entered the hold, known as Dry Berth, where once 1,305,812 lbs of tea would have been transported around the world. Here, there is a theatre seating area where you can watch an interesting video about the most important facts and numbers of the ship.

Some of the things we discovered: 653 men from 30 different nations worked on the ship over the history, including the youngest who was only 14 years old.

In 1885 the Cutty Sark took 73 days to return from Australia. It was her fastest trip!

Then we visited the Tween Deck, where various play activities have been set out, just begging little visitors to have a go. Children can try to be captain of the ship and simulate to drive the ship following the routes of the winds. There are also wooden boxes of tea and wool that became chests that hide goods or music

There is also a wooden boat free to play. Here you can also learn more about those who have made the history of this ship, such as Captain Woodgett, the longest-running commander and Jock Willis, the man who built the Cutty Sark.

Up to the main deck we admired the grandeur of the Cutty Sark, and its stunning trees for the sails. Children really liked walking the main deck and steer the wheel.

We visited the decks and find out how the crew lived, ate and slept. I was surprised to see how the spaces were rather cramped, certainly the sailors were not to be very high. 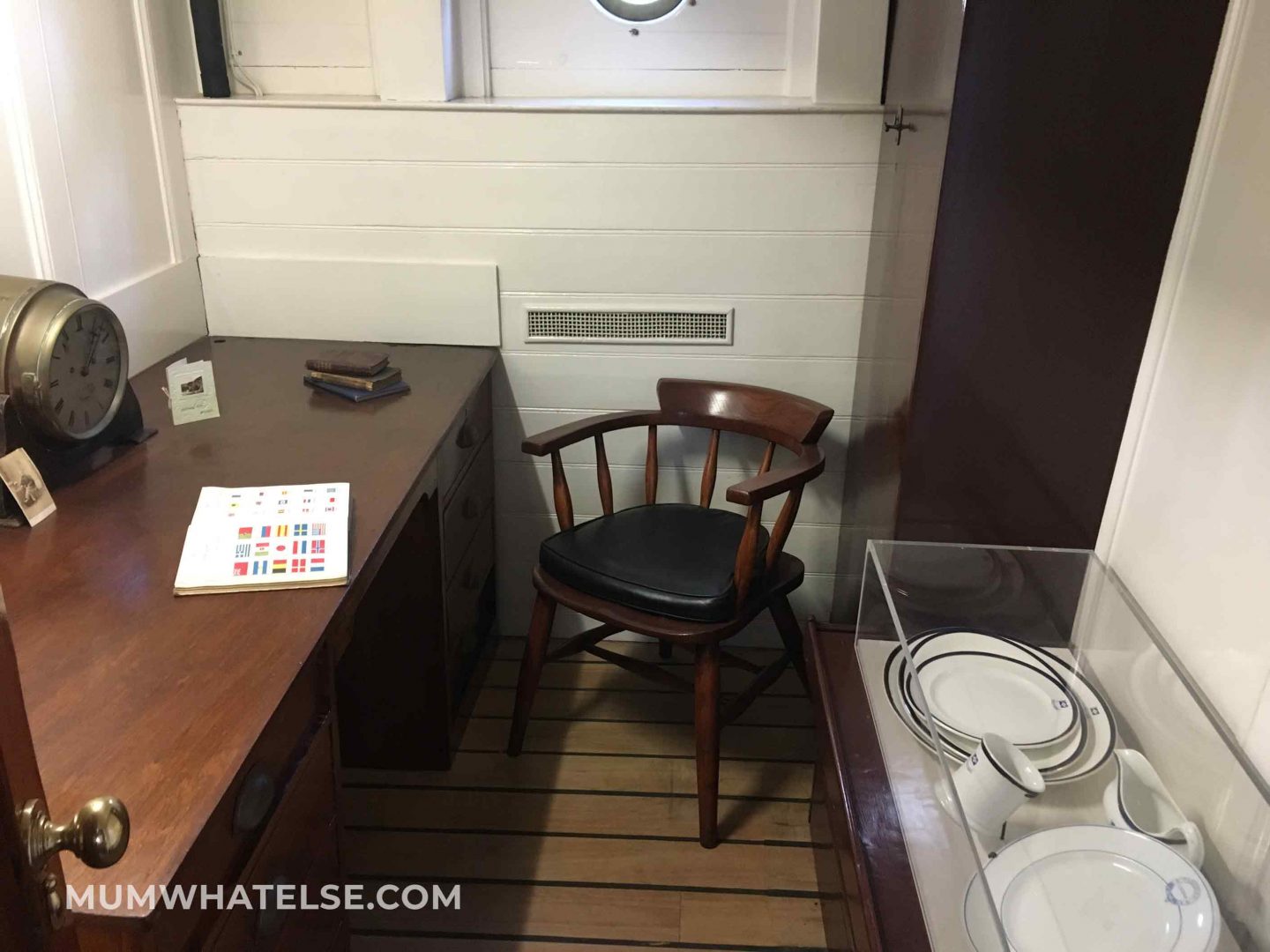 EXPLORE UNDER THE HULL

Finally we went down to the modern gallery area under the ship itself.  Here you can see and touch the hull of the ship. There is a small bar, a refreshment and buggy area.

At the far end of the gallery you can also admire the largest collection of figureheads in the world!

We all enjoyed this day out in Greenwich to visit the Cutty Sark. We pictured of what life aboard Cutty Sark was like for the sailors who survived the high seas and storms.

All in all, this is one of the best attractions for youngest visitors we’ve come across.

Have you already visited the Cutty Sark? Let me know in the comments below. 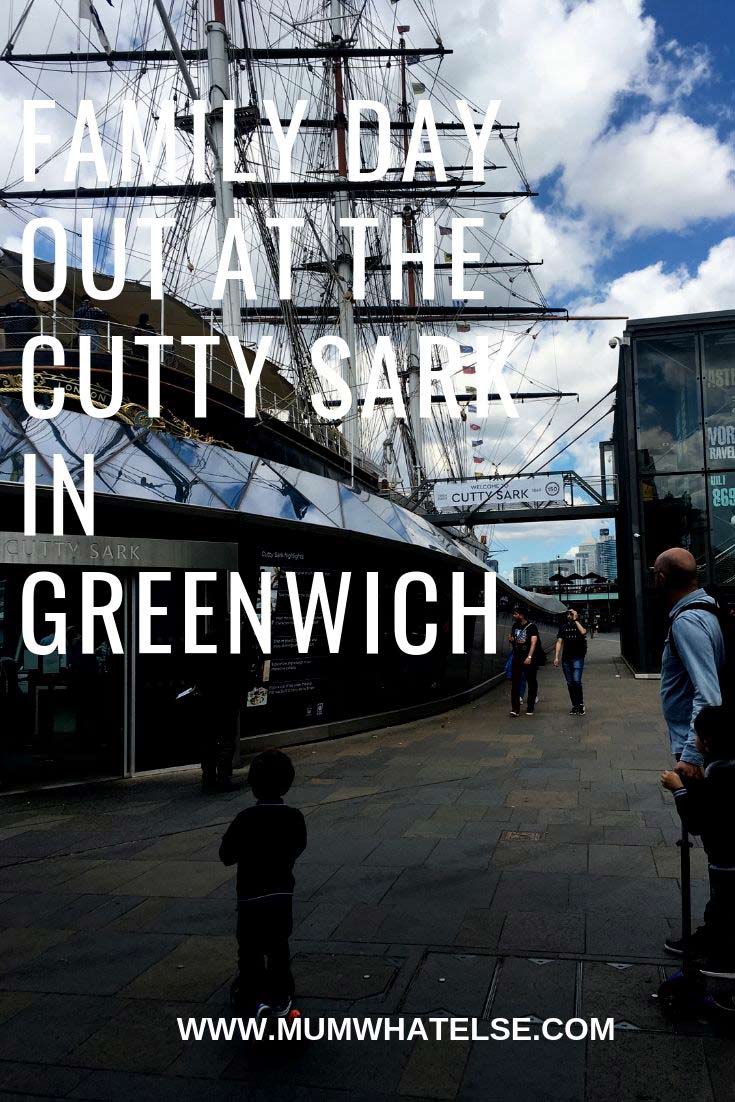 Disclaimer: This is a sponsored post. We have received complimentary tickets to visit the Cutty Sark. However, all points of view, opinions and photos, are my own and remain copyright of Mum what else.