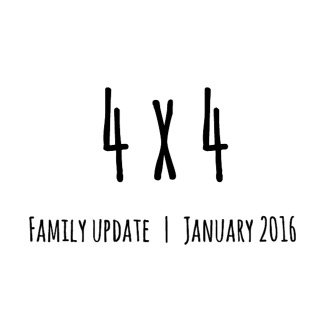 We have been four for four months. Four months of discoveries, ups and downs, joy, interrupted sleeps, cuddles, tantrums and cries waiting for the moment we could start to feel a family with its own routine. I was expecting a lot worst, but it’s too early to crow. What I learned with my first son is that there are so many steps along the first year and beyond that we have to be prepared that everything could change.

It’s been however an exhausting period in general especially because Andrea is only 21 months older than Leonardo and he needed and needs a lot of attention. There were days when simple things like going out for a walking can be hard. When I am alone with both kids (most of the time indeed) be prepared to go out it takes a lot of organization and concentration because everybody is crying! It is getting better, I mean that there are still cries and shouts, but routine makes everything easy so now Andrea knows that he has to wait that Leonardo is ready too.

So if you are alone with no other support than yourself, you have to believe that it is going to be better.

During the Italian holidays, we counted on grandparents help, so we could have some dinner in restaurants, evenings out with friends and enjoy a dancing New Year’s Eve with friends.

Before Leonardo’s birth I guessed how I could find more space in my heart as it was full booked by Andrea. And I have to say that it wasn’t love at first sight with Leonardo. It took some time for me to know and to love him. However it was only a matter of time because in a while I totally fall in love with him and I found that my hart had a lot of space available…

I have never thought “Why did we do two kids so close??!”. I am a single child and I knew I didn’t want to have only Andrea. I am convinced that too much attention concentrated on only one child is not a good idea. Beside, an advantage is that Andrea is still a little boy, he couldn’t even remember that he was the unique in our family.

Andrea has started to talk more fluently literally overnight, repeating every word we are saying and even trying to make some speeches! I love the sound of his voice and I adore how he says “mummy”. And so it feels like we are understanding each other much better. He can also count to ten both in English and Italian, that’s amazing. Every day is a new discovery.

As here in the UK kids go to sleep at 7 o clock, we are trying to anticipate time to go to sleep at 8 pm (before it was 9 pm) because I have noticed that more he sleeps and less tantrums we have during the day. As Filippo goes out in the morning very early, before Andrea wakes up, I prefer they spent a bit of time together when he arrives at home in evening. So not 7 pm however I think 8 pm is a good compromise.

As regards tantrums, there are still moments when Andrea is out of control however he is more meneagable. I know that I have to be firm on my positions and to find a solution to let the tantrum go away. Definitely he is more obedient.

Leonardo continues to be a good sleeper, he can fall asleep alone in his basket or wherever he is.

Leonardo was sleeping almost all night long with only one feed before we went to Italy for Christmas holidays. Since we have came back to London, he wakes up more than one time, he has started again to feed every three hours. Let’s see what it will be. When Andrea was theee months old he was sleeping alone in his cot in his bedroom. It is certain that if with Andrea I was strict about the matter “everybody in his own room”, with Leonardo I am peacefully enjoying co-sleeping.

Regarding his progresses, he can now grab things and make vocalize. He can follow with eyes things and people and makes big smile to everyone! He loves his hands and he is absolutely a giant as he is more than 8 kg!!!

It’s lovely to see them together even if they can’t play yet. Andrea’s blitz have became gently hugs to his little brother and he knows better how to approach him. Waiting for the time they could play together.
MUMMY UPDATE

There isn’t something really new about me, any progresses in December, I leave resolutions for the next year.

Thanks for reading. I am waiting for you again here once in a while.